Showing posts from May, 2009
Show All

May 17, 2009
We presented last out of 4 in a hot stuffy room, probably the worst time as people's concentration levels are slipping. We had some major technical issues 2 hours before the presentation, in a last minute push to get all 4 character vehicles working, we tried out a load of dts's i had exported the day before. 3 out of 4 worked in a fashion but not well enough to show in our final presentation. the 4th character that i had exported was my character which we had gotten working but drove like a house (the wheel base was too wide). I had re-exported an updated smoother model of it with a smaller wheelbase, but it was the only one that didn't work. We had all 4 characters controllable but mine controlled like a brick and the other 4 had faults like the camera was upside down. we couldn't use either of out 20+ dts exports so were pretty scuppered. we did have a saving grace, a tank-shaped model chris got off the internet that we had been using still showed we could get a cust
Post a comment
Read more 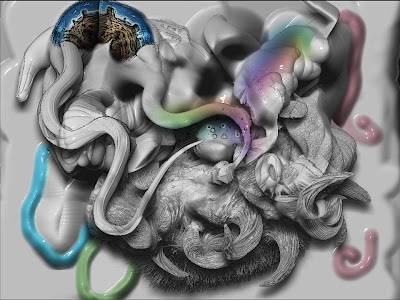 Been playing round with zbrush, and exploring its kind of 'post rendering' tools. This was unplanned, using a program i just about know, fiddling with something it wasn't intended to do but i think it came out okay:
1 comment
Read more
More posts